By Amir Taaki (genjix)
Underpinning bitcoin is its proof of work algorithm. It is a computational problem which when solved proves you expended work to solve. In bitcoin’s context, work refers to electricity and proof to the ‘target check’.
Hashing
The actual algorithm involves a hash function.
An algorithm is a list of instructions for solving a problem. An abstract flow-chart of a computer program is an algorithm.

Algorithms can be put inside black boxes called functions. Things (input) go into a function, magic happens inside, and things (output) come out.

When programmers talk of algorithms, they mean a set of instructions or a procedure which they are interested in its inner workings. When speaking of a function, a programmer is referring more to what it does rather than how it works. So in this article, when we refer to the proof of work algorithm we are examining how it works. For the hash function which is used by the proof of work, we are less interested how it works and more what are its effects.
A hash function takes a single input and gives a single output that is not easily recognised from the input. Good hash functions (there are many variants from MD5 to SHA) should hardly never generate collisions- that is when two different inputs produce the same output.

In practice, this means that hash functions generate hashes that have many digits.
$ python
>>> import hashlib
>>> hashlib.sha256("hello").hexdigest()
'2cf24dba5fb0a30e26e83b2ac5b9e29e1b161e5c1fa7425e73043362938b9824'
We put hello into the SHA256 hash function, and its algorithm computed the hash value which the function spat out;2cf24dba5fb0a30e26e83b2ac5b9e29e1b161e5c1fa7425e73043362938b9824.
Another property of a good hash function is small changes in input lead to large changes in output. This makes it difficult (practically impossible) to reverse a hash function. Bad hash functions can be reversed with enough computation power. The output hash may not have enough digits and the total search space is too small. Or there are too many collisions in the hash function.

At any second, a block may be "solved."  This means that everyone else in the world working on that block must stop, and restart their work.  Continuing to work after that point is known as working on a "stale block" because it is old data, and old transactions.
Posted by paypal alternatives at 1:46 PM No comments:

Bitcoin is a digital currency. If you have a minute, check out this video:

Did that mean anything to you? The important things are:

One key to the Bitcoin currency is the limited and predictable rate at which coins are added to the system (see 0:33-0:43 in the video). This control is achieved by tying the generation of one block (50 units) of Bitcoins to the solving of a computationally difficult problem: solve the problem, get a block of Bitcoins. The distributed Bitcoin network adjusts the difficulty of this problem after every 2016 blocks of Bitcoins are generated. The difficulty is adjusted so that on average, 6 blocks of Bitcoins (300 units) are generated every hour by users around the world. The incentive to devoting your computer’s power and time to solving the difficult computational problem is that the user whose computer solves the problem gets awarded that block of 50 Bitcoins.
For more detail about the computational problem, read the Bitcoin white paper. It’s generally equivalent to finding a number that hashes (using SHA-256) to a value that is less than a particular 256-bit target. Adjusting that target value is how the distributed Bitcoin network adjusts the difficulty of block generation. Moving the target lower makes for a more difficult computational problem: it will take more random tries to find a value whose hash is less than the target.
One more detail. Every 210,000 blocks, the Bitcoin reward per block is cut in half. Right now, the payout is 50 Bitcoins per block. Sometime soon, the payout will halve to 25 Bitcoins per block.

So, people are paying dollars for Bitcoins, and you can use your computer for a chance of being awarded Bitcoins. Can you make money off of this? Right now, I think the answer is yes, but it depends on your situation and how you approach the problem.
Remember that the computational problem is basically finding a number whose SHA-256 hash is less than the current target value. You need a machine that can do this operation very quickly, and repeatedly. Right now (May 24, 2011), the difficulty level is set such that it will take on average 1,048,471,150,000,000 hash attempts before finding one that wins you a block (50 units) of Bitcoins (that’s over 1 quadrillion attempts… I had to look that up). Your CPU power will be able to do around 2-10 million hashes per second. That means, if conditions stayed exactly as they are now, it would take your CPU about 3-10 years to win a Bitcoin block. People are not using CPUs to mine for Bitcoins.
The only way you will have any hope at being awarded a block of Bitcoins is to use the computing power of a GPU (graphics processing unit). Originally used for manipulating computer graphics, today, GPUs are being used for general parallel processing tasks. It happens that the hashing required for Bitcoin generation is a perfect fit for a GPU. Top-of-the-line ATI GPUs can do 270-360 million hashes per second (compare that to the 2-10 million per second that a CPU can do). Still, that takes about 33-45 days to win a Bitcoin block and the difficulty could be increased during that time period. (Note: Nvidia GPUs are not as well suited to this problem, giving only up to 140 million hashes per second.)
A popular alternative to mining individually is to join a Bitcoin mining pool. A mining pool is a group that has collectively agreed to work on Bitcoin generation to increase the probability of being awarded a block of 50 Bitcoins. An example is here: http://mining.bitcoin.cz/stats/. As of May 24, 2011, this pool has about 4300 worker machines (including mine). This results in a combined 430 billion hashes per second. This pool is awarded a block every 40 minutes on average. The block of 50 Bitcoins is distributed between the 4300 workers according to how much work each of them did during the search. My machine, doing 270 million hashes per second, gets about 0.02-0.04 Bitcoins from each block that is awarded. Pooled mining allows you to bring in Bitcoins slowly over time, rather than waiting for weeks for an individual return of 50 Bitcoins.

There are a lot of assumptions that go into answering this question. How much does power cost where you live? How many Bitcoins can you gain per day? What will people pay for Bitcoins when you’re ready to sell them?
Power
If you live in Canada, you’re in luck. Canada has the cheapest power in the world. In British Columbia, Canada, the rate is $0.0627/kWh. A 500W machine will draw 360 kWh in one month, or $22.57. In the US, you could be paying anywhere from $0.09-0.20/kWh. Power in some European countries is as high as $0.30/kWh.
Generation rate
I’ll assume that you have or will buy a top-of-the-line card. So, let’s use the low end of that range: 270 Mh/s (megahashes/second). As mentioned before, at the current difficulty level, this gives a 50 Bitcoin block every 45 days. If you’re doing pooled mining, the amortized rate should work out to about the same (around 1.1 Bitcoins per day) To work this out for different difficulty levels or your own hardware, check this out: https://en.bitcoin.it/wiki/Generation_Calculator
How much will people pay?
This is the most uncertain of all the assumptions. http://bitcoincharts.com/markets/ gives current data on Bitcoin prices in USD, GBP, and EUR. The prices have averaged around 6.5-7 USD per Bitcoin, but that is a very recent spike. Over the past 30 days, the average is 4.80 USD per Bitcoin.

Volume (in USD) on the left axis. USD per BTC on the right axis. Bars show volume, box and whiskers show daily values, 25-75 percentiles, and high/low.

From these assumptions, one should be able to net about $90-$100/month if you live in Canada. This will decrease as the difficulty increases, but that’s a good starting point. Even if you have to buy new hardware for this, good graphics cards hold resale value that you can reclaim once you’re done with your mining.
One interesting point about profitability… as prices rise to make Bitcoin mining profitable, more people will join the mining population, driving up the difficulty and production costs, reducing the profitability. On average, Bitcoin mining should not be profitable. Access to cheap power makes the difference. You’ll be on the winning side of average.
Posted by paypal alternatives at 1:02 PM 18 comments: 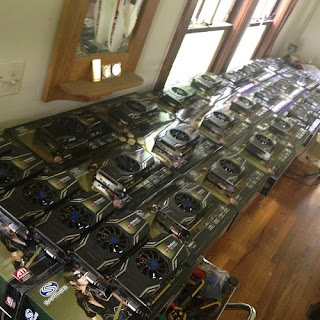 Though the recent rally in the exchange rates has caused mining profitability to rise to the highest level seen since February, many mining operators are planning for the future and liquidating their inefficient rigs, as shown in this post’s photo.

In less than six months, block 210,000 will be reached and with that event the block reward will drop by half, to the level of just 25 BTC. Thus instead of 7,200 BTC targeted for issuance per-day, only 3,600 BTC per-day will go to those mining.

Because it can’t be known what the exchange rate and mining difficulty level will be at that point in time, mining operators are preparing by either switching over to more efficient mining equipment or are liquidating operations outright — oftentimes due to the higher capital requirements needed to acquire the modern forms of mining hardware (FPGA and ASIC).

But one mining operator’s pain is another’s gain. Those operating where electric rates are a fraction of their competitor’s rates are still able to compete while mining with GPUs due to the comparatively lower cost of GPU hardware. Lower cost, maybe, but they still aren’t cheap. Even though the GPUs from this post’s photo are offered for sale as being used previously for mining (presumably for many months) they still have a relatively high market value compared to the price when they are purchased brand new. The HD 6950s in this instance, are offered at only a 25% discount versus the current price from NewEgg.

The seller, in this instance, is not leaving mining but instead “restructuring” his mining operation to use far less power to be compatible with the operation’s new solar power source. “I’m in a position to buy enough solar panels at an amazing price that I’ll never need to buy electricity again” writes forum member AmpEater. So while there likely won’t be less GPU mining occurring in total, there will be a rotation of hashing equipment. GPUs are being decommissioned where power is expensive and those same cards remain a valued commodity to those with access to power that is relatively cheap.

If the exchange rate continues to rise faster than the difficulty does, even with the block reward drop these mining operators using GPUs yet might come to find their strategy paying off handsomely.

Posted by paypal alternatives at 11:22 AM 7 comments: